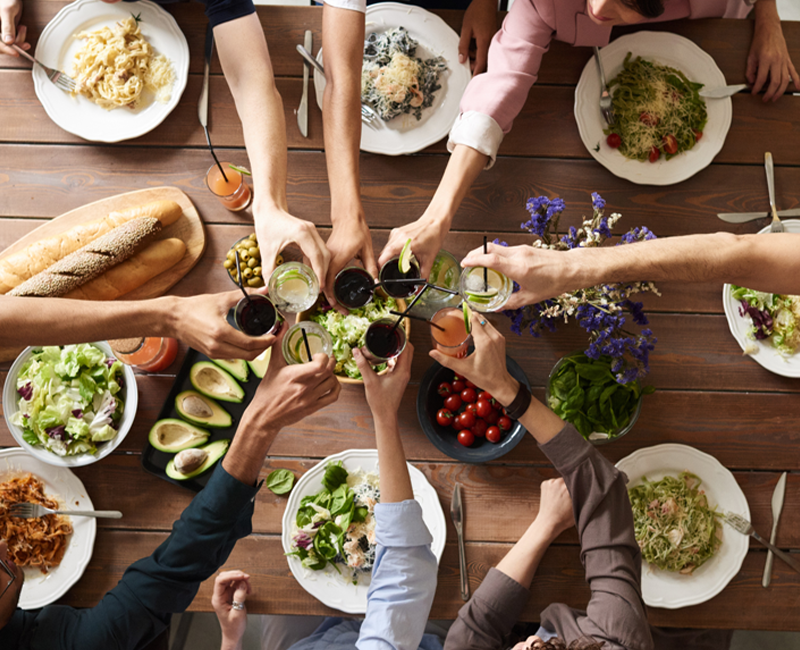 UNTIL FURTHER NOTICE: CELEBRATE EVERYTHING

A few weeks ago, I celebrated Big Love. My husband and I pledged enduring commitment, respect and fidelity.

As a surprise to him, I went way out of my box and vulnerably sang a well-known song as a part of my vows (Poor Adele, she keeps calling and asking for her microphone back).

From the audience, there was laughter and the kind of tears that come when people are touched and moved by something heartwarming or brave; whether it is a wedding, new life being birthed, an animal being rescued or the United States women’s soccer team fist pumping after winning the World Cup. That day, we were all gathered there with an implicit agreement to celebrate a ritual that symbolizes togetherness and belonging. We were there for a united purpose, to feel the intangible magic of love. Researchers refer to the experience of being moved, by a Sanskrit phrase, “kama muta,” which means “moved by love.” They define it as the sudden feeling of oneness with a person or entity.

Why is this important?

Celebration often creates an unspoken emotional bond between people, which meets our intrinsic desire for connection, collaboration and belonging; all things crucial for human fulfillment. Rituals, celebrations and rites of passage clearly mark life’s transitions. There’s a reason that traditional cultures commemorate these things; it reminds us who we are, where we came from, what we’ve lost and that we matter.

Often, when something good happens, we want to share it. We alert those we cherish or we post our Personal Press Release on social media:

“I was accepted into grad school! We adopted a new, sweet smelling puppy! I won the Louis Vuitton bag on Ebay! Our grandchild is being born today! We bought our new home! Aunt Hilda is cancer free!”

“It’s Friday! I kicked ass at the gym and lifted heavier than ever! I said a hearty hell no to overeating for a week and instead listened to my body’s cues on what was nourishing! I went to a Meet Up group and met a fresh and fabulous new friend! Whew. I made the yellow light.”

From a neuroscience perspective, positive, happy events release dopamine and other feel good neurotransmitters in our brain. The combination of sharing information, experiences and engaging in vibrant and affirming conversation creates literal changes in our craniums. We release the coveted “love hormone,” oxytocin, there is an elevation of neuropeptides produced in our central nervous systems, which in turn lowers the stress hormone, cortisol.

Social psychologist Fred Bryant is the father of research on “savoring,” the concept that being mindfully engaged and aware of our feelings during positive events can increase happiness in the short and long run. In his clever way, he posits that “people who savor together stay together.”

Knowing this, here are some ways we can curate a celebratory sense of savoring and connection to others (or ourselves,) whether it be mini fetes or momentous moments?

Party for no good reason: host them. Go to them.

I had a No Name party this spring to bring together female friends. We watched Brene’ Brown’s Netflix special and spoke the language of courage and vulnerability over chips and dip. We all left high on the goodness that comes from a meaningful night with the sisterhood.

Someone I know is estranged from her beloved granddaughter due to family conflict. She grieves this deeply. This year instead of wallowing in sadness on her granddaughter’s big birthday, she has chosen to throw a party with some family members. She bought a cake and an American Girl Doll. She will put pictures of her around and honor her in the only way she can, from a distance.

Design an Ideal Day solo or with others:

I learned this from Dr. Martha Beck in her life-coaching program. In your minds eye, fill out in Technicolor your perfect day. Where are you? What clothing are you wearing? How and with whom will you spend your time? Are you in a large group of people or alone by a stream doing yoga? If you can dream it, you can do it. Go do it. Put all or parts of it on repeat.

Do you crave a Zen Den in your home for reading, hot tea and candles? Does a space in the woods call to you? Or would it simply be to eat your daily dose of dark chocolate (for health reasons of course) with a sip of red wine after the last little shuts his baby blue eyes?

Invite your inner child to play:

Have you wanted to find your ninja and learn martial arts? What about salsa dancing or making homemade Play Doh with your niece?

Clearly ritualize a beginning or ceremonialize an ending:

Since we are continually engaged in dance of transformation, it can be helpful to mark it in some way. Let’s put Capital Letters at the Beginnings and periods at the end. It can feel good to bookend our lives this way.

So, until further notice, commemorate, praise and revel in everything. It gives meaning to our lives, boost our immune system, strengthen our coping responses and protect from the impacts of stress.

Start today with gratitude and end it with a toast to one other at dinner for the day’s accomplishments.